An Afternoon of Inspiration: Reflections on My Visit to Pilgrim Place

HomeAn Afternoon of Inspiration: Reflections on My Visit to Pilgrim Place
A- A A+

By Dara Richardson-Heron, M.D.
CEO of the YWCA USA

On November 14, I had the incredible honor to travel to Pilgrim Place in Claremont, Calif., to spend a wonderful afternoon with eight of my YWCA Sisters: Elizabeth Palmer, Mary Douglas, Dorothy Hartzler, Betty Jo Anderson, Lou Ann Parsons, Laura Fakuda, Mary Douglas, Barbara Mensendiek, Marilyn Brunger and Elizabeth Clarke. Each of these ladies played a significant role in shaping the YWCA, as leaders in our movement. 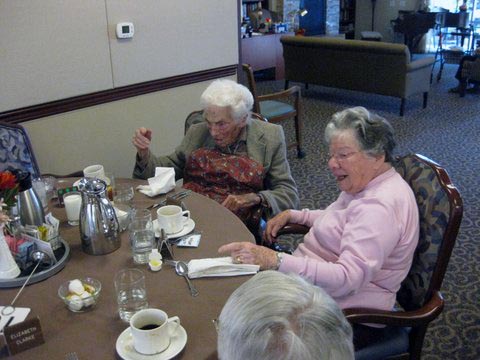 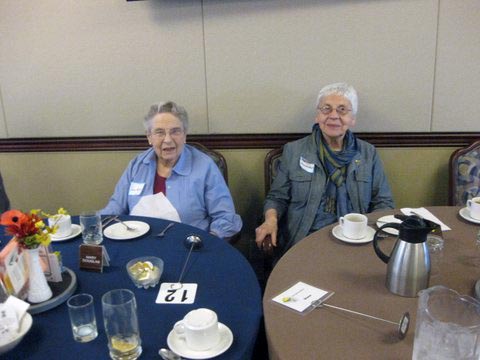 Elizabeth Palmer, who turned 100 earlier this year, was a former World YWCA General Secretary, whose lifelong dedication to the YWCA and multiracial vision were significant factors in propelling the YWCA movement into the modern world. While her chronological age is 100, make no mistake about it – she is sharp, very direct and still very much in charge! Below please find an excerpt from the World YWCA website highlighting Elizabeth’s historic YWCA legacy:

“Her early YWCA experience was gained both in the USA and during the Second World War in Great Britain where she spent 3 years as General Secretary of the YWCA of Manchester. She first joined the staff of the World YWCA in 1945, working mainly with the YWCAs of Belgium and France as they were emerging from the intense difficulties of war and occupation. In 1946, Ms. Palmer organised the first post war conference of young leaders and members of the YWCAs of Europe.  After attending the World Council in Hangchow, China, in 1947 she was appointed World YWCA Secretary for South East Asia, bringing the associations of South and East Asia closer to each other and to the world movement.  Ms. Palmer returned to the World Office in Geneva in 1952 as Secretary for Interpretation and Finance and was later appointed General Secretary in 1955, a position which she held until retirement in 1978.”

During my Pilgrim Place visit, I had the distinct honor of meeting privately with Elizabeth Palmer. She told me about her work during the Depression developing programs for unemployed women, and she shared her disappointment about the decreased awareness over the years about the vitally important work that is done at YWCAs. She told me that the YWCA must get back to “growing leadership from within and preparing young women to take the highest positions of power in our movement and country,” and then said, “We must get to know our movement and create a space for women and girls served at YWCAs around the country to express their concerns.” She very firmly said, “Our YWCA leadership must respond accordingly with programs and services to meet their needs, because listening and responding in a collective way is what distinguishes an organization from a movement.”

After that tremendous wisdom came my favorite part. Ms. Palmer grabbed my hand and said, “I have been watching you, I was very worried that I wouldn’t get a chance to meet you, so I am so honored that you took the time to come see me.” Most heartwarmingly, she said, “I really like what I see. You have revived my interest, hope and faith in the YWCA.” Now that’s awesome motivation and inspiration!

In their own way, each of the wonderful former YWCA leaders that I met and shared the afternoon with on November 14 provided me with sage wisdom about the challenges and opportunities that are inherent to leading the YWCA, in good times and through organizational change. But, most importantly, they provided me with priceless affirmation, motivation, encouragement and inspiration that will allow me to continue working collaboratively with the extraordinary and passionate current leaders of the YWCA movement, so that together, we can significantly enhance the lives of women, girls and families across the nation for many years to come.

Dr. Dara Richardson-Heron is the CEO of the YWCA USA, which promotes solutions to improve the lives of over 2 million women, girls, people of color and their families in the United States. Dr. Richardson-Heron has more than 20 years of health care leadership, management and operations experience in the corporate and nonprofit sectors. For more than 150 years, the YWCA has dedicated its efforts to eliminating racism and empowering women with a focus on women’s economic empowerment, racial justice and women’s health and safety.