The Journey for Justice for Every Woman

HomeThe Journey for Justice for Every Woman
A- A A+ 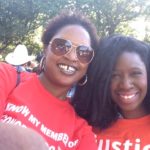 On September 16th, I was honored to join hundreds of fellow social justice advocates who converged in Washington, DC for the conclusion of the NAACP’s “Journey for Justice March.”

For more than forty days, the cadre of marchers—an inter-generational, inter-racial mixture of faith leaders, laborers, and NAACP supporters— traversed 1,002 miles from Selma, Alabama to Washington, DC, to raise awareness for a fair criminal justice system, restoration of voting rights, sustainable jobs with a living wage, and equitable public education.

Akin to any pilgrimage are the causalities along the “Middle Passage”.  Like Moses and Martin, this march’s Middle Passage included a Vietnam veteran who traveled from Colorado to Alabama and marched 925 miles carrying the American flag before taking his last step in Virginia.  The man, who was affectionately referred to by NAACP leader Cornell William Brooks as “Middle Passage,” died unexpectedly of a heart attack.  He joined the ranks of iconic foot soldiers —Amelia Boynton Robinson and Julian Bond—who marched into the pearly gates within weeks of each other.

Equally as sad, despite the progression of political and economic gains by many women and people of color over the past 50 years, the social justice issues of today are of little variance from the issues that similarly unified those who marched 50 years ago.

For women and girls, especially those of color, the journey for equal justice and opportunity is long and arduous. Women make just 77 cents for every dollar a man does.  African American and Latina women are the most disadvantaged by the gender wage gap because they earn the least of all women–between 56 cents to 64 cents for every dollar earned by a Caucasian man. #LillyLedbetter

In 4 out of 10 households with children, women are the primary or sole breadwinner in their household, yet many of these women are employed by companies and organizations that penalize them for being a working woman.  Many of whom are working mothers who do not receive paid sick days let alone paid maternity leave. So, these women must decide whether it’s affordable to take a loss in wages in order to care for themselves, a sick child or relative. #DenaLockwood

While recent high profile incidents of racial profiling focus on Black or African American males, women of color are also at risk. Women who are undocumented immigrants or have limited English proficiency are at greater risk of being profiled for “Driving While Female,”—a tactic used by some law enforcement officers to prey upon women motorists in order to sexually assault or harass because they believe these women will not tell. #AbrahamJoseph

The endeavor to ensure justice for every woman is colossal.  This is an endeavor of perseverance, endurance, and willfulness.  This is a not an endeavor for the weary or the privileged few perched in a corner office.  The journey for justice for every woman is a massive undertaking that requires all-hands-on-deck in order to dismantle the systemic barriers to equal justice etched into our country’s laws, workplace polices and belief systems, which value privilege over equality. We cannot stop until equal justice and opportunity is obtained by all.

The march is over, but the journey for justice continues.