To us, the Women’s March is all about unity.

HomeTo us, the Women’s March is all about unity.
A- A A+

As we gather today in D.C. to march, women are surrounded by united, determined women. Our collective voices, speaking as one movement – about women, for women. We come together to ensure a better future for tomorrow’s women while commanding change for the women of today. We march together to demand that our nation’s leaders listen and take action on the issues that impact women all across America. We are not debating what are the issues, instead we are searching for those who will work with us to dismantle the structural impediments to change and opportunities for women. We know these issues from the work that YWCA’s do in over 1,200 communities across the country. Plus, we have collected data in a national, bipartisan YWCA survey on what issues matter most to women. 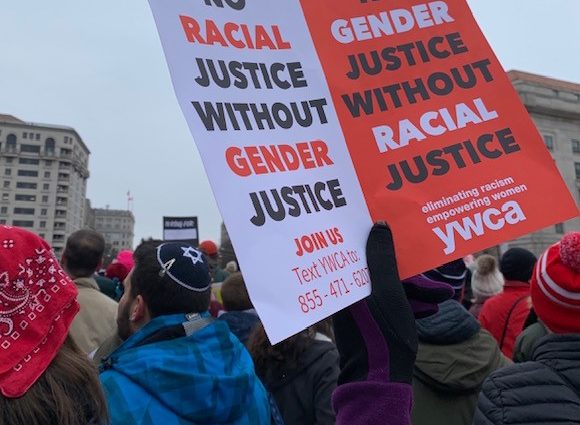 As leaders of the YWCA, we are excited to kick-off our year of civic action and engagement by partnering with many groups committed to justice at the Women’s March this weekend. Women, girls, and people of color have been under serious attack for too long. We are disproportionately negatively impacted by policies and systems that block access to affordable health care, infringe upon our reproductive rights, limit our economic empowerment, and fail to address domestic violence and the culture of gender-based violence in this country. This week, the Labor Department released data from December noting that women surpassed men in the workplace. The report also showed that women were more prone to hold two to three jobs to barely make ends meet. An issue that gets lost in these statistics is the fact that the gender pay gap compounds the challenges of women in the workplace. It is time to address the pay gap between women and men, especially among women of color.

Today’s march isn’t about who sits at 1600 Pennsylvania Avenue. Instead this is about the people shaping and protecting the future of our nation, as well as the fight for our democracy and justice. From school board, county judge, and state legislatures to those representing us in the halls of Congress and the White House, we march for representation that will understand our issues and show unwavering support for making women’s issues a priority.

Women are united. YWomenVote, our bipartisan, national survey, provides the data to stand behind our statement. Our survey captured the sentiments of over 1200 women by oversampling for millennials, GenZ, women of color and rural women. No matter where we live, the color of our skin, how old we are, or even our political party, women share the same deep concerns about the future and our families. It’s time for our leaders and for those who aspire to be our leaders to listen.

Here’s what the survey found:

1965, which later expanded critical voting rights and protections for women and people of color. As we enter the 2020 election season, we know there is a lot at stake for women. In 2020, we will measure our success not by the size of our crowds but by the strength of our collective power to exercise our right to vote and raise our voices for women’s empowerment and the elimination of racism. At today’s march we felt the power of coming together as one unified voice.

We are inspired by all of the women who join us to help keep our collective commitment to justice in our communities strong. At YWCA, we will continue to get up and do the work of justice — to change the power structures that determine the future of girls, women, and people of color. We will continue to do the work of justice until the world sees women as we do: Equal. Powerful. Unstoppable.