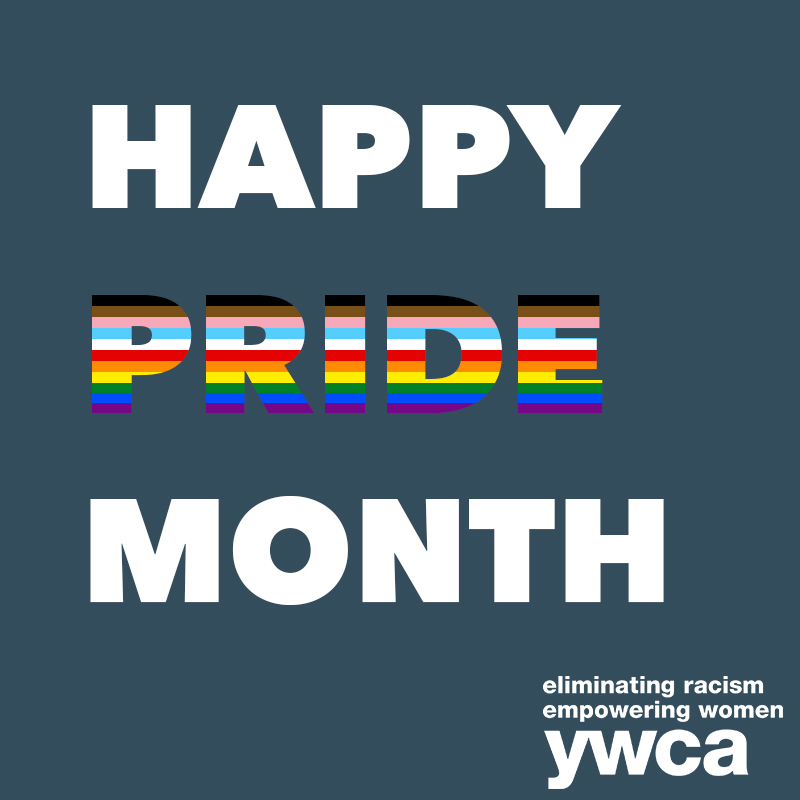 As Pride Month 2020 comes to a close, we recognize how far we have to go until true LGBTQIAP+ liberation for all is achieved. YWCA is proud to stand in deep solidarity with all members of the BIPOC community regardless of gender expression or sexual orientation. We know that pride today would be nothing without the Black transwomen who started it all – for their trailblazing we are so grateful. Now more than ever it is up to us to uplift the voices and stories of those who have been looked over, and we eagerly await a future where Black liberation is the standard for everyone.

LGBTQIAP+ organizing has existed for centuries in many different forms, both formally and informally. However, Pride month has been celebrated annually in late June to commemorate the Stonewall Riots, which took place in late June 1969. Started officially by the “shot glass heard ‘round the world” that was thrown by activist and icon Marsha P. Johnson after police raided the Stonewall Inn (a gay bar) in New York City, these riots lasted for six days. Their legacy is carried on today through Pride marches, parades, and other events all around the world.

In 2020, Pride takes on a new meaning and level of visibility as it coincides with the Black Lives Matter Movement. The intersection of these two movements is significant: all Black lives matter regardless of sexuality or gender expression. YWCAs across the country work to celebrate the lives and work toward equity in all capacities for LGBTQIAP+ individuals. This year, YWCA of Kau’i sponsored the 2020 Pride Parade and Festival. YWCA Seattle | King | Snohomish has centered the words of Blacktrans womxn “in light of ongoing murders and attacks” of this population. And at the national level, YWCA is proud to support full protections such as workplace discrimination and the Violence Against Women Act for LGBTQIAP+ individuals through our advocacy efforts.

Centering the stories of Black members of the LGBTQIAP+ community is central to liberation and equality. This Pride Month, YWCA USA is proud to share the coming out story of our beloved colleague and accomplished author, Kendal Deaunta Edwards. Please read ahead for an excerpt from My Chains Too Shook with a Familiar Sound,” and click here to read the whole story.

“I was seven years old when I was first introduced to my chains. Though they did not claim me until much later in life, they made themselves known to me in the late summer of 1997. It was not a day that I can remember, and there was no fire and brimstone, no series of hard punches from my father—only laughter: cruel, unconvinced, and certainly, condescending laughter…

…This law of the black community, “gay is either sin or confusion—nothing more,” thrives on two things: female silence and male intimidation… It came as no surprise to me that she’d be devastated when my seven-year-old mouth formed the sentence, “I think I’m gay”…

…As I searched for reasons why I was different from my fellow classmates, the voices of every adult figure I’d encountered thus far, returned to me with the same haunting phrase, “You’re better than them.” Directly following the phrase, was my mother’s pride-filled smile, and I was convinced that they didn’t like me, not because they could smell the gay on me, but because they were simply jealous of me, jealous because white people didn’t look at me and scorn or cross the street or clutch their purse when I got close. They were jealous because I owned those metaphorical blue eyes Toni Morrison denied Pecola in her creation. And so, I ran from everything Black.”