HomeYWCA Madison Urges Reform
A- A A+

The YWCA Madison encourages the U.S. House of Representatives to pass broad and humane national immigration reform legislation that allows immigrants to fully integrate into the nation’s social and economic fabric, with all of the rights and responsibilities entailed in full integration.

Immigrants are helping to grow the U.S. economy, not just in big cities as we’d expect. They are helping to fill labor shortages on America’s farms, starting businesses that employ U.S. workers, and developing new products.  It makes both humanitarian and economic sense to support comprehensive immigration reform.

Wisconsin is home to nearly 275,000 immigrants, a number that has grown tremendously. Over the past decade, the number of immigrants in Wisconsin grew by 72 percent, more than double the national average. This is to our benefit. Our state’s immigrant populations add to the state’s cultural diversity and uniqueness, Wisconsin’s education system, and the state’s economy extensively.

Currently, over 10,300 businesses in Wisconsin are owned by immigrants. From 2006 to 2010, those businesses brought in an average of almost $600 million in revenue each year—or 4.6 percent of the state total! According to Regional Economic Models, Inc., undocumented immigrants who enroll in a legal path to citizenship will generate more than 6,800 jobs and more than $547 million for the state by 2020. 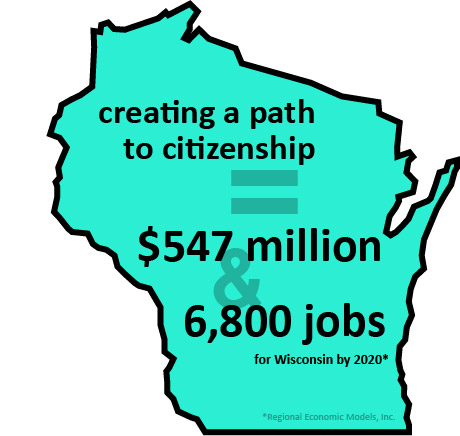 Yet, many immigrants face significant obstacles to making the United States home, even when they prove they can add real economic and cultural value. Many are forced to deal with uncertainty, waiting years for visa approvals, and stalling their plans to build or expand their businesses. Others are simply forced to return to native countries, taking talent with them that could be used to make American companies more competitive.

The YWCA Madison works with a number of families that came to this country seeking a better life for themselves and their families, just as millions have done before them. One such immigrant is “Anna” (not her real name), who came here with her husband to seek a better life. They had two children in Dane County.  He became abusive. She and the children escaped and found housing at the YWCA. Anna was working at Head Start where she was promoted from working in the kitchen to working in the classroom. She managed to save $4,000 and moved into housing elsewhere in the community. Anna still works at Head Start, takes English Classes and contributes to her community as a volunteer.

YWCA Madison is deeply committed to advocating for a common-sense immigration process that keeps families together here in Wisconsin, provides adequate protection for immigrant victims of sexual violence and trafficking, and creates a pathway to citizenship for the quarter million immigrants who aspire to be citizens.